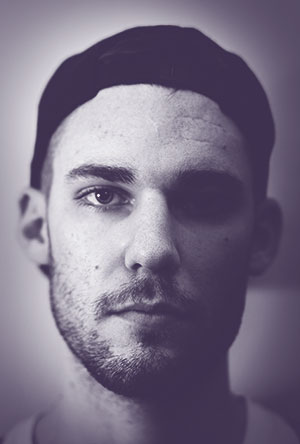 I really like asian culture, and Japan is somewhere that I have been wanting to go for a long time. So when I was looking for tweets for this project, I searched for anything related to Japan, and I found the one about bullet trains and I decided to use it. I find that it is usually easier for me to create something when I am passionate about it or familiar with it.

I decided that it would be cool to incorporate the Japanese flag into the piece, and discovered that I could basically turn the entire poster into the flag. For the red dot in the middle of the Japanese flag I made an illustration of a map of Osaka and constricted it to the space of the circle and made it red. I really didn’t want the words to take away from the flag at all so I made a little transparent drop down banner and confined the words to that space. I wanted the font to be very matter of fact, but still have an emotion to them, and I think that Helvetica Neue did the trick. The words are italic and I created the little bullet train graphic to move in the same direction as the italicized words. Then I added the #blessed to the bottom right corner to balance out the weight of the words.

The poster design was inspired by @qstormprowres tweet.
Copyright of the artwork belongs to Storm Sharrett. Contact him at Stormalongharbor@gmail.com for usage and licensing.

While I have no real intention on where this personal project may lead, it is my hope that you will see a design on this site that makes you pause for a moment and reflect on your own blessings.

Enjoy life. Have a grateful day!